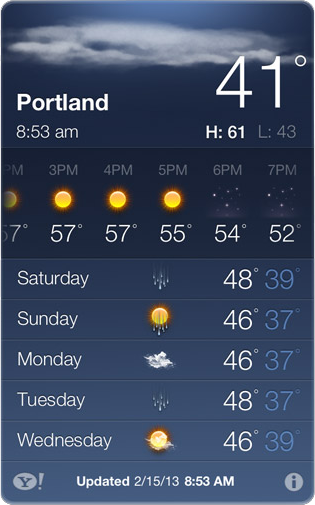 In the screen shot above the current temperature is 41º but the low is listed as 43º.

This is lazy work that shows a contradiction to end users because last week’s predictions (highs and lows) are mixed in with current data (current temperature and the hourly report).

Apple’s (weather) app gets its data from Yahoo weather, but I’m sure I’ve seen this behavior in many other weather apps, websites, etc. They show the historical predictions for the high and low, failing to update them as the actual data comes in. If the low was predicted as 50º, it doesn’t matter if a freak storm should drop the temperature to 32º—the app still claims that “today’s low will be 50º.” The app is lying.

The flip side to this is, a degree here or there doesn’t make a real-world difference. And while I don’t like showing inconsistent data to users, Matt at Say Yeah takes a different attitude to this discrepancy:

In this case, who cares. Weather is never accurate until you’re in it, it changes throughout the day, and a degree Celsius or two degrees Fahrenheit doesn’t matter. If this was forecasting revenue in thousands of dollars, it would be equivalent to a $10 discrepancy.

For a forecast, that’s fine. But if you’re showing current data, don’t also show contradicting forecasts without identifying them as such.

In other words, if there’s value to comparing forecasts to actual information, do so, but visually identify the difference between the data points.

And for a weather app on your phone that shows it was last updated the minute you checked, the data should be current.