John Gruber gave the keynote speech at The Çingleton Symposium this past October, assessing the tech industry from his position keynoting Çingleton 5 years prior, through to the industry as it stood at the time of last October’s keynote, and looking ahead another 5 years.

Looking at the current state of the industry, Gruber reiterated Microsoft’s Windows 8 mantra, “No compromises!”, as Windows 8 looks to bring a touch experience to the desktop and have the power of the desktop on their tablets. The trouble is, this is a massive compromise of an essential tenet of design: reducing complexity.

Many times your enterprise in-house apps will be derived from an existing desktop application environment, or based on line of business systems that your users depend on. Its easy to fall into the trap of attempting to bring every feature and function from the desktop app down to the mobile device. This approach will usually not deliver the type of experience users expect nor need given the mobile context. Remember that users have different needs for how they might approach or accomplish certain tasks on a mobile device, and certain tasks might not be practical for a mobile device at all.

So, back to apps, Gruber paraphrasing the project management triangle: 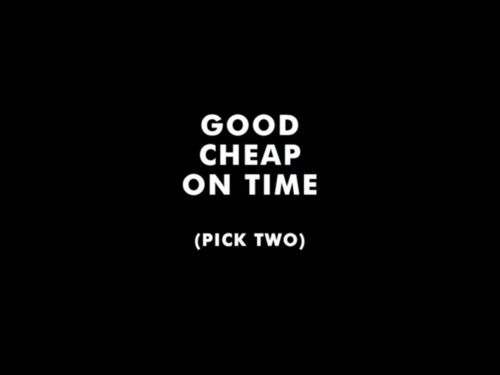 Gruber suggests, if you really want to be great, you’ve got to pick just one. But, where he goes with this is that Apple isn’t focused on good, cheap, or on time. Rather, their number one priority is user experience.

For Apple, they are singularly focused on the experience across every touchpoint. From the hardware, to the software, to the store, to the packaging, to the support Apple provides, and on and on. It’s this unique, company wide focus on user experience that’s allowed them to excel from near death to king of the world status. To not just define new markets, but to own them year over year.

And what Apple’s done now is show the mass market what it means to be great designers. To care about experience and really deliver something holistic, thoughtful, and courteous to the end user. So now, the average consumer is perhaps starting think like designers. And they, too, would would rather have nothing at all rather than have a piece of crap.

So for us, and for you as an app owner, designer, developer, or investor, Gruber leaves us with this:

One simple way to look at it is that there are far more people who’ve never bought an iPhone and who’ve never bought an iPad, who will in the next five years. More than all of us who’ve already bought at least one to this point. And I don’t see how anybody can deny that, unless something unbelievable, y’know, dramatic changes. I mean, that’s certainly the way everything is going now. And so if you think this app store platform is big now, you really haven’t seen anything yet.

This is the right time and the right place. This is a once in a career opportunity. This is like being a Rock’n’roll musician in the late sixties.

This is like being a film maker in the seventies following Scorsese, Coppola, Steven Spielberg, George Lucas (when he was sane).

If you don’t feel that you’re now in a position to do the best work of your entire career, to look back and say, ‘This was the time, I was there, I did this, I helped make this thing a reality’, then you need to find a new position.

This chance will never come again. And we’re lucky, we’re so unbelievably, incredibly lucky that it even came this once.

You can view the entirety of John’s talk on Vimeo.

Not sure if your team is focused on the most important product outcomes?

Learn more about our approach to product strategy.