Any piece of technology, any piece of interaction giving it an individual personality that exists in the narrative story that you’re trying to tell or even you’re internal narrative, it makes it not a piece of technology anymore. It makes it something totally different. And so, the more personality that you can give to it, I think, the better. And, you know, I say personality and that sometimes comes across as it being a character and it sometimes can be, but it can also just be in its outward aesthetic. If you were to take just a television and add a different, completely different aesthetic to it, it becomes something else. It becomes something just a little more magical than just a TV on the wall.

Sound embodies certain personalities, and so what I do is if I’m working with somebody else’s audio, then I’ll listen to it, and I will translate that into what I’m pulling out of the sound, so different characteristics. What I like to do is pull out those story elements, even if it’s not a literally story, there’s always some underlying idea of even a hint of something happening. The essence of this idea of a story behind every song.

– Well, our senses affect our perception of the world. So we learn about the world by touching it, by tasting it, by seeing it, by smelling it, by hearing it, and when you start to play with that … So when you start to play with new relationships … So let’s say that I see something red. And then I taste it and it actually tastes like lime, whoa. It really starts to mess with what you think of as real, as right. And so, that ability, and that’s actually called cross-modal experience, so how one sense can affect a different sense. When we start to play with that, I think, there’s obviously all sorts of new creativity that can open up, but it also pushes us to rethink our expectations of the world. And I think that that’s a really cool way of being. And it allows us then maybe to have different kinds of relationships with other people for example. There’s practical application of that, too, not just in making work, but maybe also in our daily lives with how we interact with each other.

– If you’re not able to influence how people behave, then you’re not doing anything relevant. It doesn’t matter to people if you’re creating this great AR thing that nobody is actually using. So you need to understand people.

Everyone’s a creative and the tools that are now available to us only just further that.

How far can our minds take us? What’s possible when innovation, technology and creativity is added to the mix?

A global leader in presenting tech conferences, the Future of Innovation, Technology and Creativity (FITC) team took Toronto on a journey to A World of Pure Imagination—this year’s theme of FITC Toronto 2019.

For 18 years, the FITC conference has inspired and educated thousands of digital creatives and industry experts from around the world. This year, over 1000 people sat in on keynotes, panel discussions, workshops and fireside chats at the Hilton Toronto to feed their creative minds. Speakers from Adobe, NASA, Google, Shopify, and many other leading names in the design industry shared their lessons and discoveries in technology and design.

From advances in augmented and virtual reality, to food, sexual monkey gifs, and life-sized robots, there was a lot to see at experience this year. Here’s what we wanted to share with you from this year’s conference.

Everyone loves food, but is there more to it than satisfying our stomachs? Food technologist, designer and multimedia artist Emilie Baltz challenged attendees to question the ultimate purpose of food in her talk Food: Not For Eating. 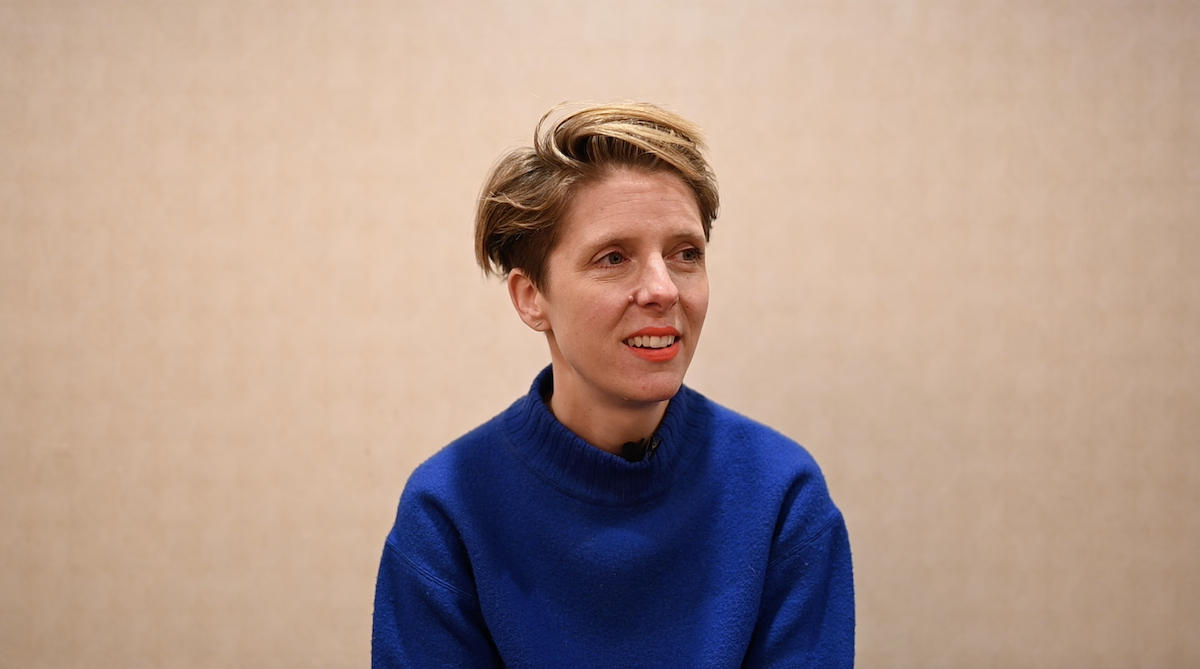 Baltz specializes in storytelling for the senses, (the ability to feel stories physically in our bodies) and food’s ability to inspire innovations in interaction design. She uses food as a material for design, expressing how it can introduce new creativity in the world. This year, she explored how food inspires creativity and engages humans emotionally, suggesting that designers can use these factors as a jumping off point for inspiration.

“It’s not about food, it’s about relationships.” ~Emilie

It seems virtual or voice-monitored cookbooks are on the near horizon. With the rise of AI bots and voice assistant tools, cooking by-the-recipe could be transformed into a more interactive and enjoyable experience rather than a chore. Bon Appetit!

Simplicity is a Complex Design Concept

Not according to Google UX Design Lead David Hogue. He told us why that’s not the case during his talk entitled Simplicity is Not Simple. His top three questions:

Every designer has struggled with at least one of these questions. Thankfully, David had some great answers.

Designers are problem solvers. They can clarify complex systems that come from poor design methods, poor project management, or technological shortfalls. The overall goal is to ensure that what they create is as simple as possible for users. 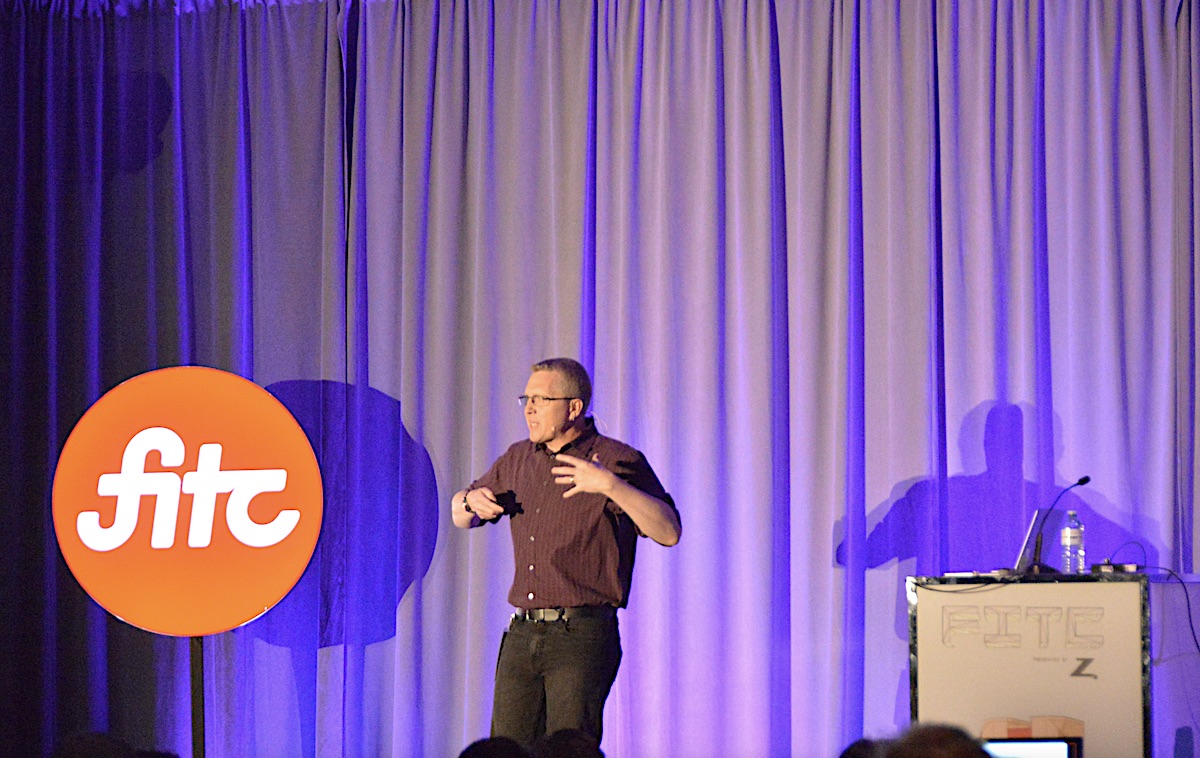 “Sometimes systems are naturally complex, we design to help people deal with the complex.” ~David Hogue

At the same time, too much simplicity can result in underperforming UX design. With simplicity, you have to meet in the middle. Hogue gave designers three considerations to keep in mind when working to deliver simplicity in UX design:

He also Identified key steps designers should take as they embark on the journey of simplicity, which we will be sure to keep in mind for our future projects:

Design is Terrifying, Yet Rewarding

Designing interactive robots may be fun, but it is by no means easy. Executive Creative Director Michael Fullman took us through his design journey at VT Pro, proving that his job is messy, rewarding, and includes challenges that you can’t prepare for or anticipate.

As one who designs robotic interactions and 3D products for massive endeavours like Telestron and Coachella, Fullman understands the importance of testing and learning from big design mistakes. 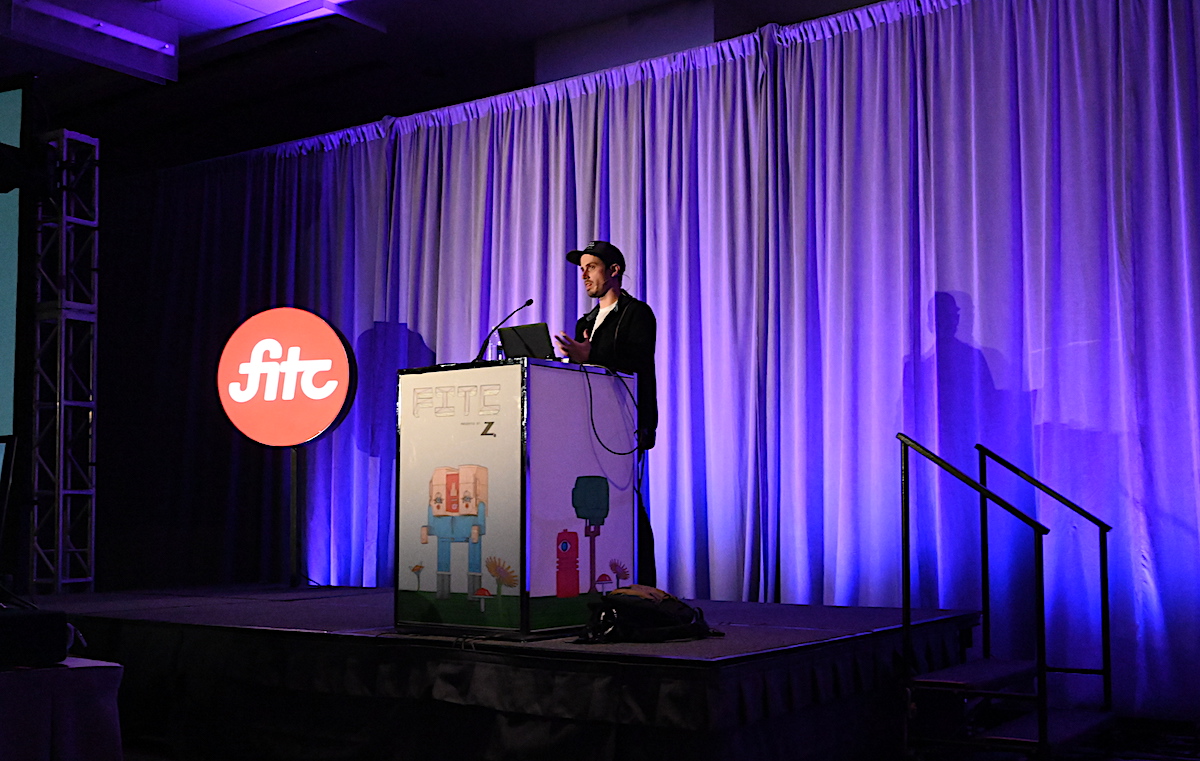 “Getting feedback is the best part.” ~Michael Fullman

Experimentation and adaptation go hand-in-hand in the innovative work that takes place at VT Pro. Fullman broke down three benefits to embracing adaptation—which are also great principles to live by:

Creating a unique type of technology requires a great deal of risk—like the risk of not being understood, or the risk of alienation. But it’s often these risky projects that, if carried through patiently and successfully, set you apart from other designers—in a good way.

For experienced designers and aspiring designers alike, going through the archives of David Carson’s iconic design work was a dream. His session Intuition, Collage and Design took attendees through a fascinating journey of innovative magazine design, and use of experimental typography.

He showcased his previous work for brands such as Nike, Pepsi, and Microsoft.

Carson also shared the quirky, painful, and peculiar details of his designer journey, as his work took him all around the world. The moral of the story: do what you love, and have fun in the process. 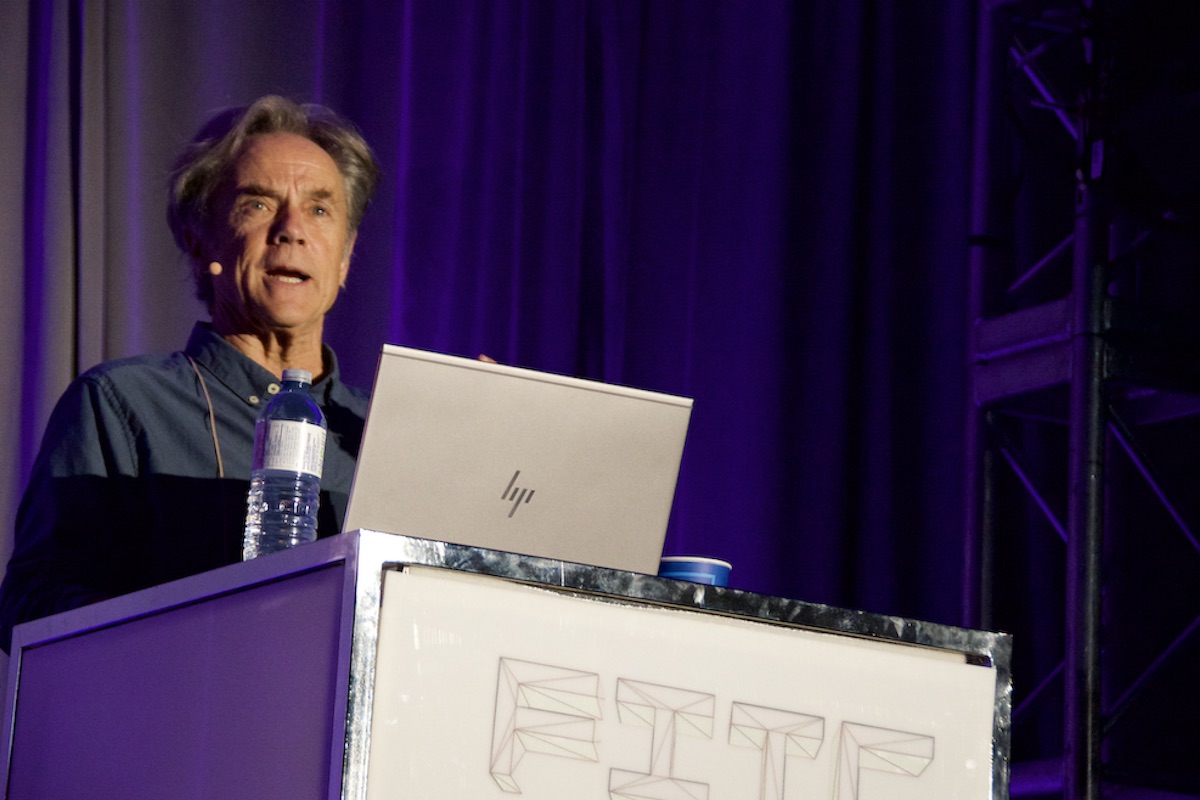 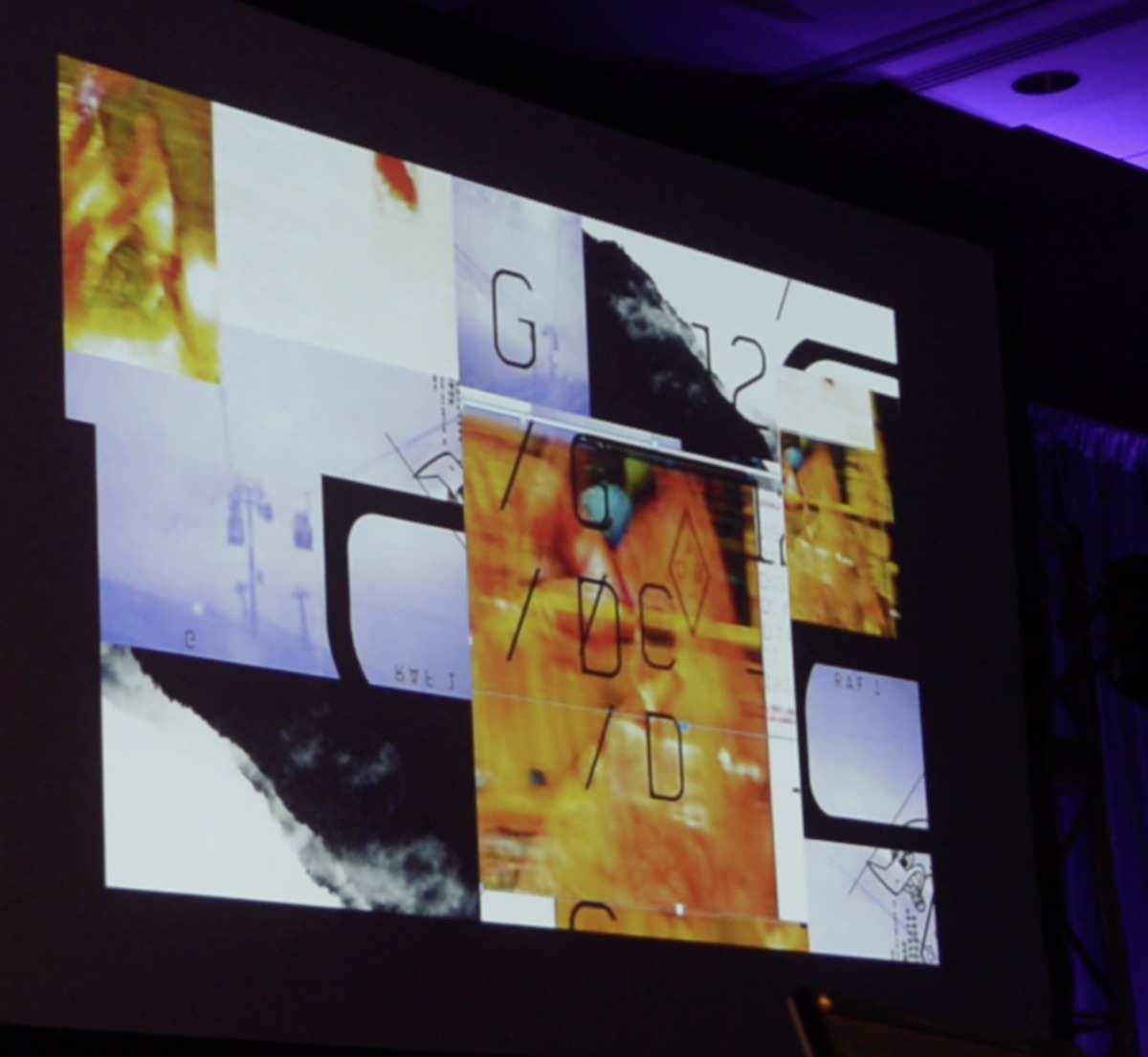 “If money was not an issue would you still be excited to do that work daily? I think we are in a field that allows you to do that—allows you to not watch the clock and wait on vacations. To seriously enjoy what you do and not do it only to pay bills.” ~David Carson

Carson finished off with a word of encouragement for the next generation of designers who may have felt discouraged at any point throughout their creative journeys.

“Your wave is coming. Hang in there.” ~David Carson

Some other fantastic talks we attended include: Design for Mobile AR: Patterns and Principles by AR and VR Interaction Designer Eugene Meng from Google, Death and UX by Senior Creative Director of Digital and Innovation Vincent Ramsay-Lemelin from Sid Lee, Psychedelics and a Munky’s Cerebral Manifestations by Design Director GMUNK from gmunk.com.

Attending FITC Toronto is always rejuvenating. It’s an open space for designers, creatives, and technologists to share innovative insights, digital development tactics, and creative technologies, while further uniting the digital and design industry. We can’t wait for next year!

Don’t let FITC 2020 pass you by! Until then, live life with a pure imagination.

From the Say Yeah team

Experience design as a foundational skill

If you’re looking to bring fundamental experience design methodologies and execution to your team, we’re here to help.