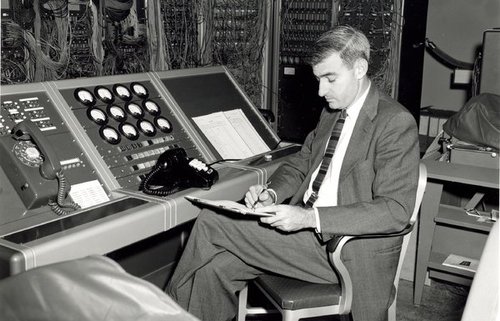 There’s a wonderful obituary for John E Karlin from the New York Times. The obit is surprisingly more thorough than Wikipedia’s Karlin bio, given his pioneering role in human-factors engineering. Though there can be no doubt about the design industry’s respect for him and his now more recognized accomplishments.

The entire article is worth a read, but some key highlights of his influence on the telephone include making rotary dialling easier and spearheading the research which lead to the now ubiquitous touch-tone keypad layout, from land lines to iPhones, gas pumps to ATMs.

The now-ubiquitous touch-tone keypad layout, from analog to digital: 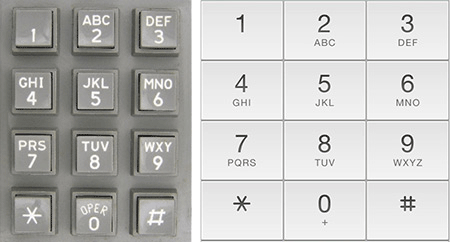 In contrast to the layout of calculator keypads, the as-yet-unreleased touch-tone keypad of the 1950s would eventually settle on an inverse layout which Karlin’s research showed helped reduce dialing errors (while following the previous standard of rotary phones, which began with 1, and the natural flow of the alphabet).

According to Bob Ford, of AT&T’s Bell Laboratories…when AT&T contemplated the design of their key pad, they called several calculator companies, hoping they would share the research that led them to the opposite configuration. Much to their chargin, AT&T discovered that the calculator companies had conducted no research at all.

For Karlin, it seems research and experimentation was the key to his great number of insights. A PDF copy of the July 1960 issue of the Bell Systems Technical Journal details some of his team’s work on touch-tone keypad layouts, including keying time and keying errors as influenced by keypad layout, travel time, force, sound, and tactility.

Read the full NYT obituary for some additional research anecdotes.

Portrait photo courtesy of Alcatel-Lucent USA via the NYT.