Craig Saila just shared Readability, Instapaper, the Network and the Price we Pay by Anil Dash. In Anil’s words:

Since the success of the recent Readability app on iOS, things have gotten tense, not between the creators of [Instapaper and Readability], but between supporters, fans and enthusiasts in the community for both apps.

Case in point: John Gruber called Readability “scumbags” for hosting content and not sending user’s back to the source websites of that content, in addition to holding on to cash they’ve earmarked for publishers. 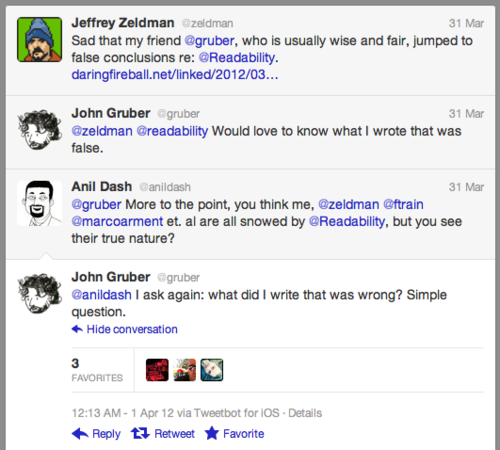 UPDATE, 1 APRIL 2012: My use of the word scumbags has drawn condemnation from Jeffrey Zeldman and Anil Dash — both of whom (a) sit on Readability’s advisory board, and (b) I consider my friends. I take back nothing, and judge Readability only by their actions, but allow me to take another crack at the above:

I’ll give you the reason: Readability has long exhibited a profound sense of entitlement to work published by others. They collect — and if unclaimed, keep — money on behalf of publishers with whom they have no relationship, and so I find it in-character for them to now steal page views too. Everyone knows shared links should point to the original resource.

I’m not sure it’s fair just yet to label this behaviour as “stealing” or assume a sense of entitlement is driving these actions. That’s certainly how things appear on the surface, but this saga has yet to play out. As others (who are not on Readability’s advisory board) have stated, this may be more of good people trying to figure out a tough problem rather than scumbags screwing other people over.

A perspective which is essentially covered in Mike Davidson’s post, “What the Betamax case teaches us about Readability” and the comments which follow. Though he does bring up some fair points about copyright concerns presented by Readability:

By facilitating the public retransmission of an author’s content in a format not authorized by the author, it would seem that Readability is committing copyright violation, en masse.

But let’s get back to Anil:

As I started to get dragged into a discussion with John on Twitter tonight about how “we can legitimately disagree about the mechanics of this payment method and suggest ways to improve it”, I realized: We’re doing it again. We’re fucking ourselves. We’re crabs in a barrel, all pulling each other down, and the whole web is going to lose as a result.

And this is how we all lose with this kind of in fighting between tech industry friends and colleagues. Anil on his Moveable Type vs Matt Mullenwegg’s WordPress:

And the thing is, [choosing sides] can be effective, because it does help the eventual winner.

Which is never either of the players that are engaged in the stupid battle.

Because when I would spend my time flinging zingers at Matt Mullenweg about the merits of Movable Type vs. WordPress, you know who was winning? Mark Fucking Zuckerberg. Facebook won the blogging wars. The web became a more closed place than if either Movable Type or WordPress had evolved into the tool that powered social networking.

I strongly fear we’re about to cause the same damage to the reading tools market that we did through our stupid fights in blogging. We’ve got two great, vibrant reading tools that are innovating in the space. To my mind, they’re entirely complementary and should really be working together. As I see it:

To me, they’re just not competitors. It’s only the most short-term thinking that would make them so. But those who are fixated on that short term thinking might want to get their shots in on their less-favorite player. And if they do so, they’ll destroy both.

And the only survivors will be the competitors with inferior products who don’t have nearly as good an experience, as much passion for innovation, or as much love for the web. What those competitors do have, in some cases, is $100 million in venture capital funding. Enough to wait it out while these two tiny little bootstrapped players get torn apart by their own fans.

It doesn’t have to be this way.

Unfortunately, this brings me right back home to the Toronto tech community, and a disconnect between a couple of influential individuals. The two Daves haven’t been able to get on the same page and being at lager heads surely only serves to undermine our community. The winner in this case, of course, will be another city.

I wish I had the answer for that one.