When we originally built the commenting system on the old PTE (pre-Tumblr era) Say Yeah website, we required users to create an account and sign in before they could comment. This created an unnecessary barrier to entry that reduced the likelihood that a user would comment. It just took too long.

At the same time, we wanted to ensure that we weren’t dealing with moderating spam comments all the time and the account creation process pretty much eliminated this. Additionally, the same user account for commenting allowed a user to post or like an event on the TO Events Calendar, so the barrier to commenting for calendar users wasn’t as high.

With all that in mind, and to encourage the conversation by making the process less painful for users, we took a fresh look at the relationship between commenting and user accounts on the Say Yeah site. For users who weren’t using the TO Events Calendar, it was clear they had no reason to make an account unless they wanted to comment, so we worked to combine these actions.

In short, we encouraged people to create accounts by attaching the creation process to a rewarding action.

Here’s how it worked.

The initial form is just two fields, asking only for an email address and comment. 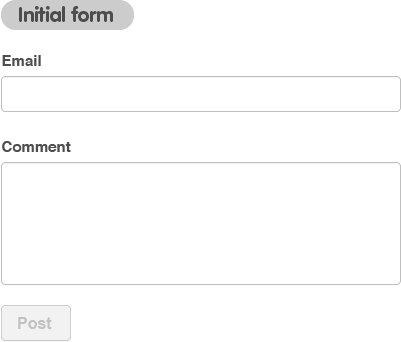 Once the user enters their email address, and progresses to start writing their comment, we do a quick look up using AJAX to see if their address is in the database.

If we find it, we welcome them back and present a password field to confirm they are in fact the user we think they are. 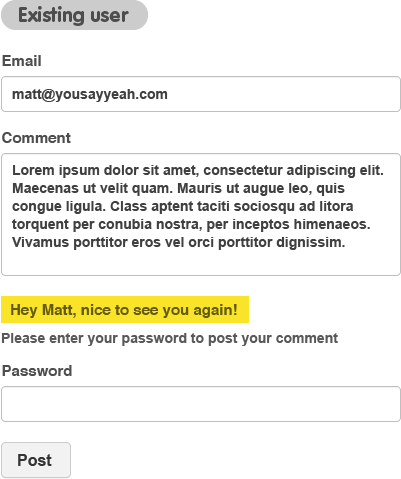 If the email address isn’t recognized, we note that it’s their first time commenting and ask them to select a username and password.

We also suggest a username using the first part of their email address as the name. This is probably not what people will use as their name, but it gives them an idea of what we’re looking for in a username. 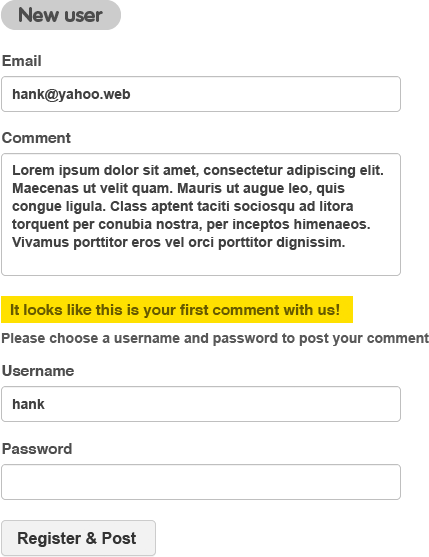 The button language also changes from ‘Post’ to ‘Register & Post’ to indicate that the user is indeed creating an account with us that can be used for other purposes, such as creating events on the TO Events Calendar.

We’ve since moved away from commenting in favour of Tumblr’s system of Likes & Reblogs, but we know this process of creating accounts during the commenting process was a valuable addition to our site, as it allowed users to sign up at a time when they’re most engaged with content on the site and made an otherwise cumbersome process as simple as possible.

Would we have had more comments if we allowed users to post a comment using just their email address? Sure. But you can be sure it would have all been spam.