Back in May I wrote The Nastiness of E-books, discussing the typographic shortcomings of all the major e-book distributors, specifically, Kindle, Nook, and Kobo. With the relative exception of iBook on the iPad, which offers fully justified books, with hyphenation to help with reading longer volumes of text such as, well, books. The Kindle, Nook, and Kobo do not support this, but they still often choose to justify the text of their books making for some very awkward and difficult to read blocks of text, as illustrated here by Dmitry Fadayev:

But here come the new Kindles.

With the release of new Kindle devices last week, it was my hope that the world’s largest e-book seller would right this wrong and make reading that much easier for those of us who would like to move from print to digital.

Unfortunately, the first thing I noticed when going to the new Kindle Paperwhite promotional page was this extremely poorly justified promo image: 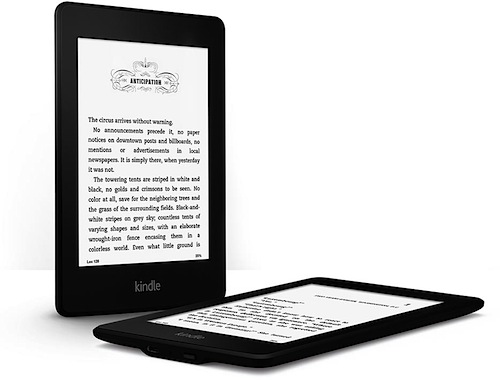 Look at the giant spaces between words on that 4th line. You can park a bus in any one of those spaces.

So much for Amazon addressing this issue that’s preventing me from getting on the Kindle bandwagon.

Then again, there may be a bigger issue in the e-book ecosystem than hyphenation. One that affects all the main e-book vendors, from books to comics to textbooks. And that’s DRM.

We’ve been down this road before with music, and it appears book distributors and publishers are throwing up the exact same inscrutable barriers, locking us into formats and software that has an unknown shelf life, preventing us from controlling how portable our media is and what devices we consumer it on. All the same hostile behaviour towards consumers we did away with in the music industry (at least for purchased downloads, which is all that concerns me).

David Crow’s just acknowledged many of these e-book issues, motivated to reflect on the media he’s been buying due to cost fluctuations the same way I’ve been motivated by remembering my troubles with DRMed music:

Now, I remember DRM because it was a massive pain in the ass when I was buying DRM music and, in one specific example, couldn’t play it for friends, on my own computer, even with my password (other licensing limitations got in the way). That was the last time I bought a DRMed piece of music.

How publishers have allowed this to happen is beyond me. It’s remarkably short-sighted. And generally thoughtless. From Dark Horse Comics FAQ:

DO I OWN THE DIGITAL COMIC I PURCHASED?
You do not. As with Amazon, Nook, and other e-book companies, you don’t own the book you buy. You are licensing the right to read the book on supported and authorized devices.

Boy, that last sentence is irksome. In the case of new releases, I’m generally asked to pay the same price as a physical copy of the book. With the physical copy, I may read it wherever and however I choose, lend it to whomever I choose, and resell or give to someone. But if I pay online, I’m asked to authenticate my purchase via a software of the vendor’s choosing on a device they’ve decided, for now, to support. What a load of shit.

I suggested in response to David’s article that we as consumers do the following:

1. Stop buying DRM content unless it is ludicrously discounted. Enough so that it’s okay that we may lose access to it in any matter of months (due to software or device changes the vendor decides not to support).

2. Either start a general petition or start reaching out to those publishers who are supporting this mess with words of encouragement to move away from DRM and unreasonable pricing for restricted, licensed content.

3. Be sure to give props to publishers offering content unencumbered by DRM either during your checkout process or whenever you have a chance to do so.

In the 24 hours since David shared his article, I’ve read some encouraging news from Rosenfeld Media, a publisher who was already well down the road of not dicking customers over with DRM. And I received a nice email from Dark Horse offering 50% off my next digital purchase, which I politely declined and then directly explained why via email.

You have elected to provide the comics you’re licensing digitally in a closed, rights-restricted format which means that I’m limited in both what devices and software I may use to read them and how I may transfer them to another user (ie, gift or otherwise transfer my ownership). Further, I’m stuck with a format that will surely not remain available to me over time as technologies change and Dark Horse decides to stop supporting their current technologies and/or new and existing platforms and devices.

If you adjusted your digital pricing to start at about 75% off printed retail pricing I would suggest that to be a fair price given the above limitations, but I’d rather Dark Horse, a company I’ve long supported, take a stand on this foolish practice of licensing rights-managed content to consumers and, contrary to the ridiculous justification stated in your FAQ, see you follow in the footsteps of O’Reilly, Rosenfeld, and other e-book companies in licensing your content without DRM so your customers have the opportunity to choose the software they wish to consume it on for years to come.

Adrian Kingsley-Hughes suggest on ZDNet that publishers’ fear of Amazon (and Apple) owning the e-book market because DRM locks most books sold to their devices will be enough to drive DRM from books. I’m not as confident as he is, so I encourage you to start a dialogue with the publishers you support.

And, if you’re a Kindle user, prodding them about hyphenation wouldn’t hurt either.