Well.ca has apparently opened a ‘virtual store’ somewhere in Toronto. This is particularly exciting given the fractured nature of inventory, payments, and in-store mobile adoption, and particularly following up on South Korea’s foray into the space last year. 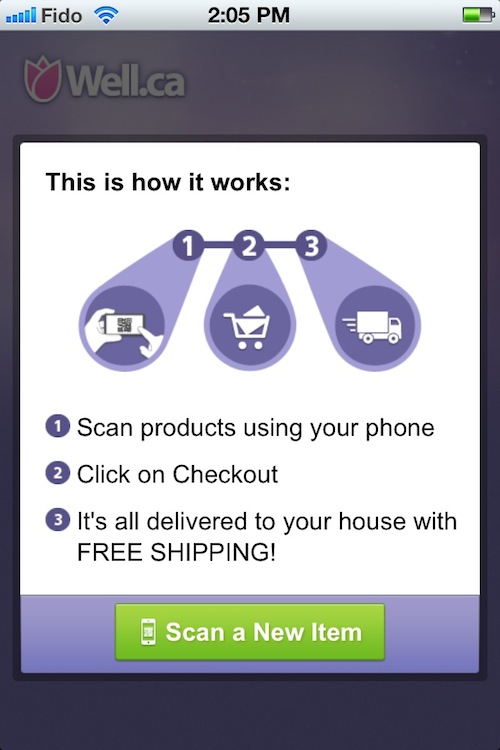 Sadly, using barcodes as the method of tossing items into your shopping cart seems rather convoluted, but it’s an interesting first step. It would be much easier to touch and go than have to hold up your phone and align it to QR codes. QR codes, of course, mean you can just plaster a wall with a decal and you’re pretty much done, so it’s an easy step technically, if not entirely user friendly (I am no fan of QR codes — at the very least, let the user photograph the product, not a code).

Pretty cool, at any rate.

A nice surprise was that there was free Wi-Fi in the space. It’s the attention to detail that go along way in executing technically advanced ideas.

I was surprised to find out that the experience of scanning items was also easy to use. I didn’t have to align the scanner exactly to the QR codes, which was good since some of the shelves were out of reach.

Alas, Marina Strauss reports, along my own line of thinking:

Still, while mobile retail is about to boom, the jury is still out on the use of QR codes, said Kaan Yigit, president of Solutions Research Group. Only 20 per cent of Canadian smartphone owners use them; those people are generally male and over half the users are under 30, he said.

For the virtual-store idea to work, shoppers first need to install the app and then use a QR code. “Unless what they are selling is highly exclusive or unique, there are just easier ways to buy the same thing – either at brick and mortar stores or online.”