So, I got this spam on Twitter the other day. I say it’s spam because I don’t know who this is, and they certainly don’t know me all too well sending me a Groundhog Day link. A check on AtomicShroom’s Twitter stream and, hey, he’s sent the same stock message to several dozen people. So, yep, spam. 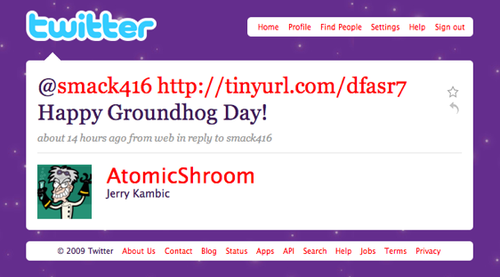 I see our lovely Groundhog Day link is hosted at winstormdp.com. A quick WhoIs check later and I’ve got contacts from winstormdp.com and winstorm.ca to write:

Any idea on why Jerry Kambic (http://twitter.com/AtomicShroom) is spamming people on Twitter with: http://winstormdp.com/groundhogday2009/emercial.html?id=12333490470.72261&template=default

You should probably put a stop to that.

Followup the next day. Not bad. And it’s from Jerry. My man on Twitter:

Lee, I apologize for causing you any trouble. I did not mean to Spam anyone. I was just replying to a bunch of folks by wishing them a Happy Groundhog Day with a link to the event. I am new to Twitter and will not repeat what I was doing.

Well, Jerry. There’s a bit of confusion here on Twitter etiquette. ie, what is deemed a reply vs what would be considered, say, an intrusion. Maybe I can help:

Thanks for the followup.

Twitter is about having a conversation. Randomly messaging dozens of people you’ve never met and haven’t taken the time to get to know (y’know, by reading their feed) all with the same stock message (ie, not speaking to them directly or saying anything personal) is the equivalent of going up to a girl at a bar and dropping your pants, and it is most certainly not a “reply” to anything. To put it another way, it’s spam. Point being: Join the conversation, don’t interrupt it.

There’s no quick fix here or with any social media. If you want to participate, you need to do so by listening, learning and responding to each individual within the context of the conversation they’re having.

If you want to share your Groundhog Day message, then post it once to Twitter. If your followers like it, they’ll share it out, and their followers will do the same, and so on. Forcing a link on people you don’t know will just get you blocked. And then you’re out of the conversation permanently.

Oh, Jerry. Way to hang in there, man:

Thanks for the advice. I’m learning.

And the moral of this story is, there’s no need to be rude if someone is invading your Twitter space. It’s much better to be presumptuous, assume that you have something to teach them about how they’re supposed to use Twitter, and that they’re willing to learn from your fine example. Just like Jerry is.

Of course, there are other approaches.